The Message In The Sky at Woodford Folk Festival

Over the past few weeks there has been a quite a bit of negative media attention on the appearance of Meryl Dorey of the Australian Vaccination Network at the Woodford Folk Festival today. Initially Ms Dorey was to be presenting a talk on Autism, entitled 'Autism Emergency, 1 in 38', in which she was no doubt going to assert that 1 in 38 children are now being made autistic by vaccination, an assertion with no basis in fact. As a result of the pressure put on the Woodford Folk Festival, they revised Ms Dorey's appearance to taking part in a discussion forum, making this announcement on Christmas Eve:


"Because of controversy surrounding vaccinations, Meryl Dorey’s talk “Autism Emergency, 1 child in 38” is being  replaced with a broader forum discussing vaccinations, with Meryl Dorey agreeing  to participate.
Dr Kidd, Queensland President of Australian Medical Association has called on Woodford organisers to ensure all sides of the vaccination issue are presented.
Professor Andreas Suhrbier (immunologist and research scientist) has agreed to participate in this forum at 2.15pm on December 29th at The Blue Lotus venue.
The forum will be moderated by Dr John Parker from Doctors Without Borders."


You may be wondering why there is such opposition to Ms Dorey's appearance at the festival. Ms Dorey is not a health care professional and has no qualifications in the area of health care or vaccination. While Ms Dorey is entitled to her opinions, she is not entitled to present herself as an expert on the subject and disseminate those opinions to the public as 'health advice'.  The N.S.W Health Care Complaints Commission issued a Public Health Warning about her organisation after conducting a year long investigation which found that the AVN: 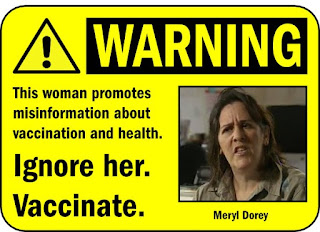 So why should this woman be given a platform to provide incorrect and misleading health information? To do so is not only dangerous to public health and bad PR for Woodford Folk Festival, it also goes against the policy of some of the festival's main sponsors,  Moreton Bay Regional Council and the Queensland Government. On Thursday 15th December, the Queensland Health Minister released a statement reinforcing the benefits of vaccination and stating that:


"...fringe groups like the misleadingly named ‘Australian Vaccination Network’ are wrong to discourage people from getting vaccinated." and "Just don’t take her nonsense too seriously"


Woodford Folk Festival have failed the public and their sponsors by giving Ms Dorey a platform to speak about what even the QLD Health Minister calls nonsense. A group of citizen activists, frustrated by the festival organiser's lack of responsible action have already created a media storm and public discussion in the lead up to Ms Dorey's appearance.

Today, during her time on stage, those same citizens have taken it upon themselves to highlight the misinformation Ms Dorey provides by handing out brochures on the common vaccination myths that Ms Dorey is likely to present. The other way of countering Ms Dorey's nonsense is a little more creative, and a testament to what a small group of determined people can achieve:

Above the Woodford Folk Festival, right now there is a plane. A plane towing a message behind it, a simple but important message:

Thanks to Phil Kent who was on the ground to take this photo.


A message brought to you by 34 citizen activists from StopAVN. This small collection of students, pensioners, health professionals and other committed lay people pooled together the $2,800 cost of the plane and towbanner to present the message that is so important to public health, and the health of our children.